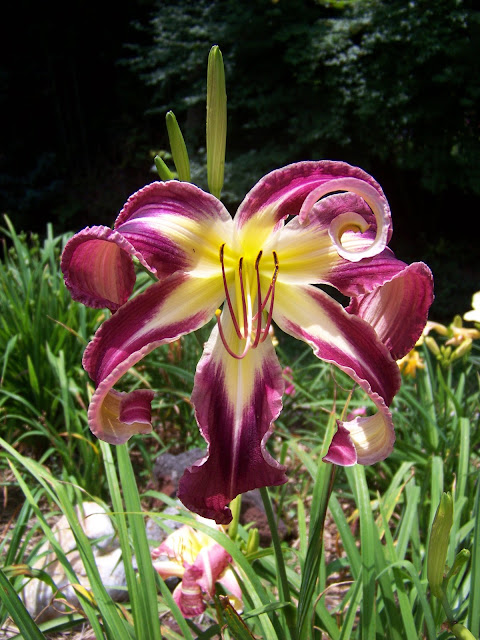 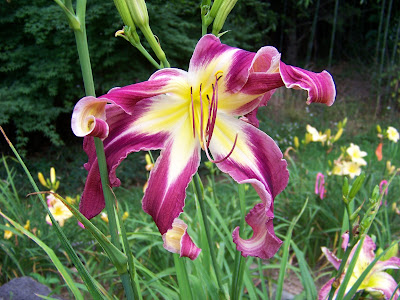 Named for the first and last three words of the famous David Bowie song, 'Ziggy Stardust', this wonderful flower is a tribute to his innovation and aesthetic. The effect of the eye and throat of the flower reminds me of the famous 'thunderbolt' makeup design Bowie wore on the cover of his album 'Aladdin Sane'. The narrow, cascading unusual form reminds me of Bowie's typical lithe and dramatic pose. If this Ziggy played an instrument, it would definitely be a guitar, and this cultivar is as wild, eye-catching and memorable as the creator of the song it is named for!

Ziggy Played Guitar is a wonderful cascading unusual form that has been a real standout since its first flower. From seeds I purchased on the Lily Auction in 2010, the first flower was in 2012. The color is bright, clear and pretty, standing out strongly in the garden. The big throat starts out green radiating out into white rays that then move into bluish-white midrib and petal and sepal edges and the throat fades to jade and chartreuse with the same white and bluish-white rays in the evening. The darker eye makes the complex throat stand out even more. The petals and sepals are a bright grape-purple that holds well through the day and withstands rain and sun. The flower is large and the form is always stunning. The cascading petals are ruffled and the sepals curl and roll with a wavy edge. 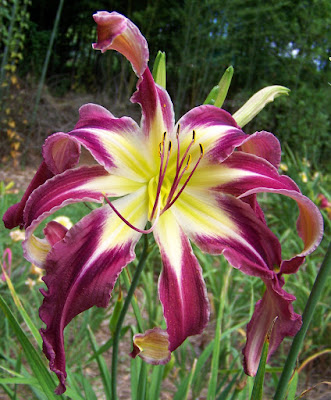 Sometimes the flower is polytepal. Not often enough that I noted that on the registry, and I have never really calculated the percentage, but it does it a few times most years and when it does, it is REALLY awesome! 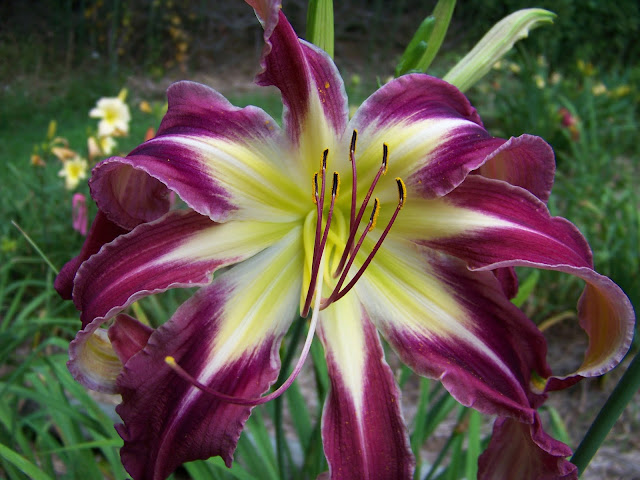 In the above picture of a poly flower you can really see the bluish-white tone that radiates out of the throat and onto the edges of the flower.

Ziggy in the grow-out field showing how bright and eye-catching it is from a distance. It is really spectacular at clump strength with the tall scapes holding the flowers above many other things. The branches are also well distributed on the scape and so flowers are not just all at the top, but well-distributed above the foliage. 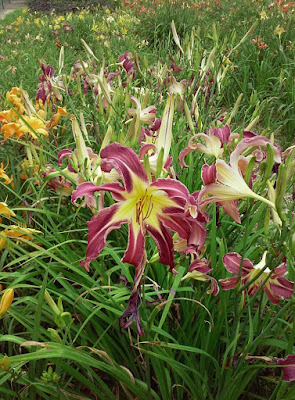 Here the row head-on, and a poly flower on Ziggy Played Guitar front and center. It has thrown poly seedlings for me. I suspect if it were mated with high-percentage poly daylilies, it would make some great poly kids. The profusion of bright flowers and regular, reliable rebloom in my garden is a big plus, giving a lot of show in the garden. I usually see instant rebloom as well as late season rebloom. 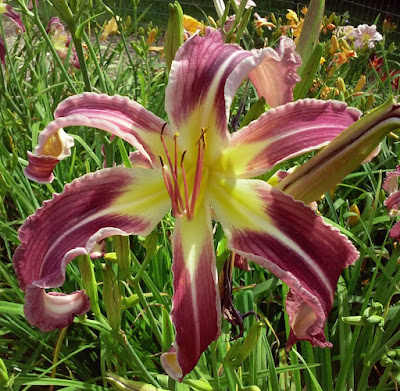 Ziggy Played Guitar has only been pollen fertile for me, but the pollen is very fertile (as of 01/29/2018, I have confirmation that Ziggy has set pods for a grower in a greenhouse, so it isn't sterile, but I would still call it pod-difficult). After a couple of years of getting no pods, I questioned whether I should even use it, or if it could ever be an introduction, but from 2012 to 2016, it never showed a speck of rust and the seedlings I produced from its pollen have tended to be very rust resistant and show many of the amazing traits of Ziggy's flower as well. By 2016 I knew it would have to be an introduction. It just has too much good going for it not to introduce it. The branching and bud count is moderate, but the rebloom more than makes up for that. Many of its seedlings also show rebloom for me. 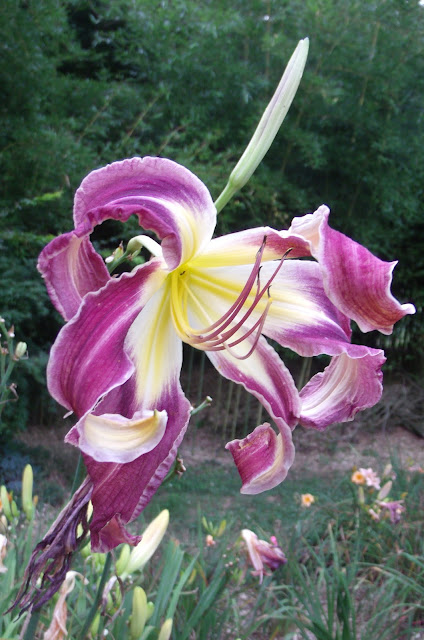 This late evening shot of Ziggy Played Guitar really captures the drama of this flower in the garden. If you love cascades even half as much as I do, this one is a staggering flower. Those weeping flowers in their bright and clear colors on the tall scapes glow in the garden. Even by sunset the flower is still gorgeous with strong substance. The bluish tones only become stronger through the day and the throat still shows a nice jade tone even at sunset. This flower radiates like a star, as wild as Ziggy and as strange as the spiders from Mars. 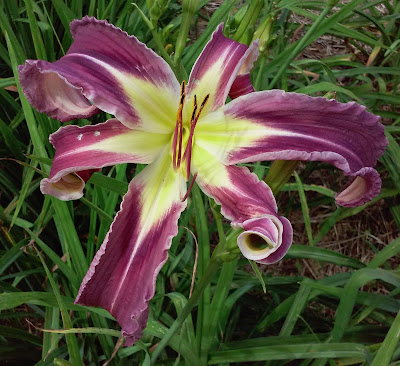 With semi-evergreen foliage it has been very hardy here every winter (even the brutally cold polar vortex winters of 2013/14 and 2014/15), never showing serious damage, never reducing the number of fans or dying out in the center of the clump. I don't know how far it will go, but from its performance during the polar vortex winters, my guess is that it will do good further north, probably at least into zone 5 and maybe even into 4. I have a report of it doing well in testing in zone 5B. However, with the foliage type, it should also do well in warmer climates, at least zone 8 and 9, and with the strong rust resistance and breeding value for rust resistance it has shown during my five year screening program, this should be a boon for growers and breeders in warm winter gardens where rust is present and can overwinter. Reports from a friend testing Ziggy in the south show that Ziggy thrives with fast increase and shows extremely high rust resistance there also. Ziggy Played Guitar is moderately thrip resistant. Thrips are only a major problem here in the early season and so the later season rebloom scapes escape this problem in my garden. That may vary in other situations though, depending on when thrips are most active.

Ziggy Played Guitar has been an excellent breeder for me, producing amazing seedlings and many with very high rust resistance as well as striking, lovely and weird flowers. I think this plant will be a boon for unusual form, polytepal, bluish-purple and/or rust resistance programs. I also think it will simply be a pleasure in any garden it is grown in.