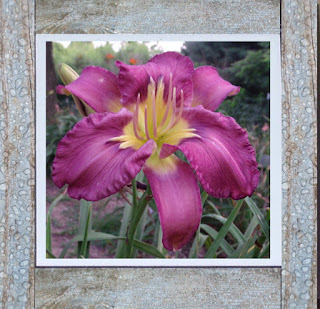 I will discontinue carrying Lavender Feathers as a regular stock item in 2022. For more information, see this post.

Lavender Feathers is named to honor both of its parents, Texas Feathered Fancy (pod parent) and Lavender Blue Baby (pollen parent), and has been an exemplary plant and flower here since its first flower in 2013. The flower is a lovely, clear lavender with blue hints toward the eye and on the cristations, above chartreuse moving down to a very green throat.

The flower also features consistent cristation on each flower. It has shown this trait from its first flower, and in each year it has flowered here in my garden, on all three petals of every flower it has produced to date. This was a major factor in my decision to introduce it, but not the only one. The flower is also frequently pleated, though this pleated sculpting trait is not 100% and seems to be more prominent in some years than others. When the petals pleat, they also often lift up, making a three-dimensional form much like a daffodil or some orchids. At other times, the flower is completely open without sculpting and then the flower can be quite flat. Sometimes there is also relief sculpting coming out of the throat and up past the cristations onto the petals. This relief is also inconsistent, but does occur at times. The pleating and relief are interesting, but the very consistent cristation is the most important feature of the flower. 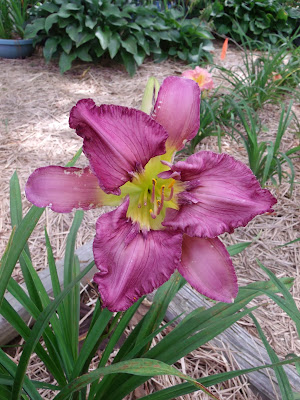 The plant is a senescent (dormant) going completely underground here in the winter. The foliage is a nice, medium-dark green that is attractive and low to the ground. The plant multiplies moderately fast. The increase is not as fast as Substantial Returns, but it is not slow and does increase each year. Newly divided plants recover quickly, though it is usually the second year after division that the plant is fully established and shows its strong blooming habit.

The established plant shows good scape to fan ratio. The scapes are sturdy and they average between 20” to 24” with two to three branches and a top Y on most scapes. The bud count averages between 12 to 18 buds, sometimes more on well-established plants. I have registered it with the lower end of its averages on scape height, branch count and bud count as it takes a couple of years to become established and show the higher numbers. Grown in better conditions than my hybridizing garden, with inputs of water, fertilizer and soil amendments, it will probably perform even better, showing even better numbers on all these counts.

Just as important as the consistent cristation and the nice plant is that Lavender Feathers shows extremely high rust resistance (seeming-immunity) to rust in my garden and has consistently shown this level of resistance from 2012 through 2016. Its rust resistance is much higher than either of its parents in my garden. More about this below. Lavender Feathers also shows moderate resistance to insects such as thrips and aphids (also more so than either of its parent), but it is not immune to these insect pests. 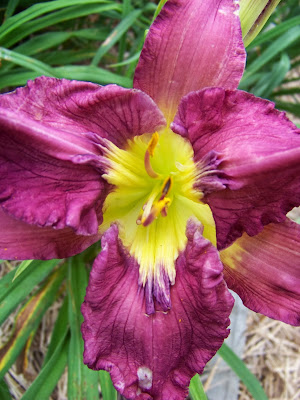 In my own breeding work with Lavender Feathers, I have found it to be a very useful breeder. It has shown good breeding value for rust resistance in my experience, especially when combined with other cultivars that are highly resistant, but also producing some resistant seedlings when crossed to less resistant partners. It has also shown breeding value for the cristation trait. When bred to its half siblings (with Texas Feathered Fancy as the common parent of both) or backcrossed to its own offspring and grandchildren, I am seeing a range of beautiful flowers with cristation, many showing the same high consistency as Lavender Feathers. I have also noticed that Lavender Feathers can produce good resistance to insect pests in its seedlings when crossed with other plants showing high insect pest resistance. A few of its seedlings so far have exceeded its resistance to insect pests. Lavender Feathers seedlings have consistently shown fertility both ways as well. Its fertility both ways, consistent cristation, very high rust resistance and moderate insect resistance makes it a useful breeder for this interesting new type of daylily. 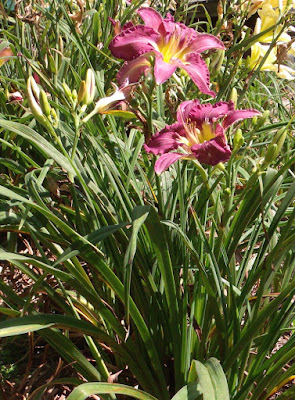 Lavender Feathers has an interesting backstory. It derives from a group of seeds, all from various crosses with Texas Feathered Fancy, that I bought on the Lily Auction in late fall 2010 or early winter 2011. There were 15 seeds in that group from Texas Feathered Fancy x Lavender Blue Baby (TFFxLBB). Lavender Blue Baby is one of the parents of Texas Feathered Fancy, so this was a backcross. From the 15 seeds of this cross, I germinated 12 and raised 12 seedlings in 2011. I did not see any blooms in 2012 on any of these seedlings, but by late summer of 2012, I had my first big rust outbreak. I used this to screen for resistance in the cultivars and seedlings I had on hand at that time. Of the 12 seedlings from TFFxLBB, only one showed any rust resistance and it showed no rust at all that year (or any year thereafter). I discarded all the susceptible seedlings (except one that showed moderate rust resistance, which is still in my mom’s garden that I have never bred from). This was very disheartening. I was certain there was no way I would possibly get any cristation from one seedling, but I kept it for the rust resistance alone (purple and lavender rust resistant daylilies are quite rare).

In 2013 I saw the first flowers on that TFFxLBB seedling - the very first flower showed double cristations on all three petals! I couldn’t believe it. You could have knocked me over with a (lavender) feather! Its pollen was also very yellow and looked good. I used its pollen all over the place that day, as I have on most days of hybridizing since. To this day I am still amazed to have gotten this seedling from the single rust resistant seedling that I kept. Such is the way of random genetic segregation.

Over the years, I have observed this seedling closely. It has been important to me to observe it over several years. I have divided it, spread it randomly into various parts of my gardens and surrounded it with highly rust-susceptible cultivars to see if I could give it rust. As of 2016, I have never been able to give it rust, not even when surrounded in a full ring by up to eight highly susceptible plants, literally covered in rust and raining spores down onto the leaves of Lavender Feathers. During the five years of screening, I have never seen a single speck of rust on Lavender Feathers and I have produced numerous seedlings from it that show equally high resistance when they too are surrounded by highly susceptible, infected plants. 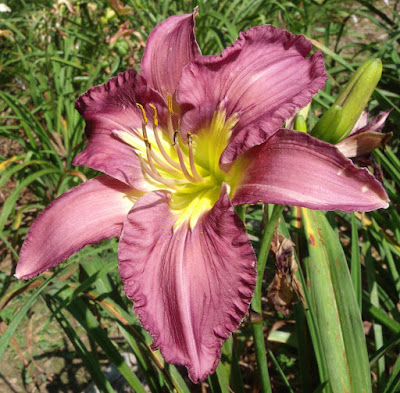 As I have observed it for rust resistance, I have also closely observed its other traits. Lavender Feathers has consistently shown cristation on every flower, and this too have passed to many of its seedlings. The insect resistance has remained steadily moderate. The fertility both ways has remained consistent. I have also had it grown in a few gardens in the south where it has done very well and has shown the same consistent cristation, fertility and rust resistance as I have noted in my garden. Being from two southern-bred dormants, I am not surprised it has done well further south than my zone 6 garden. I have only so far placed it in one zone 5 northern garden and I am awaiting information in how it performs there and how well it survives the colder climate in that garden. I will update this when I have any report on its performance there. 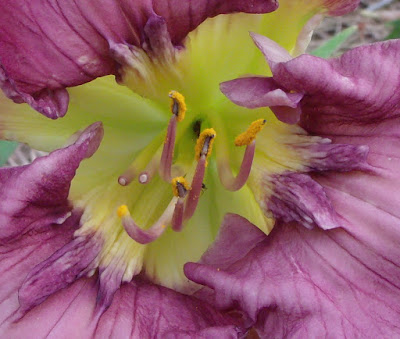 Both Texas Feathered Fancy and Lavender Blue Baby show moderate rust susceptibility (or you can call it moderate rust resistance), but neither show anything approaching seeming-immunity. As well, Lavender Baby Blue occasionally shows one cristation on a petal or two, while Texas Feathered Fancy frequently shows cristation but does not consistently show the trait on every flower or always on every petal.

I remember speaking to a friend about Lavender Feathers back when it was an unnamed seedling. My friend has also grown both of its parents and had found them to show a lot of rust in his garden. He was incredulous that they could produce a seedling as resistant as Lavender Feathers has been in my garden. I explained to him that it is well-known from rust research in wheat that some resistance genes can be recessive. It is possible then that some rust resistance genes can be recessive in Hemerocallis as well. 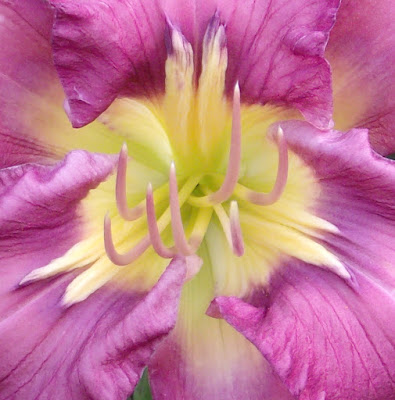 I suspect that since both Lavender Blue Baby and Texas Feathered Fancy don’t show extremely high susceptibility (moderate susceptibility, which is also moderate resistance) they likely carry some genes for resistance. Perhaps they both have one dose of a dosage-specific dominant gene, or they have one or more recessive genes heterozygous, or they have some combination of homozygous and heterozygous recessive and/or dominant resistance genes blended in such a way that it results in partial resistance. In any such example, Lavender Feathers may represent the segregant offspring that has all those genes (or enough of them) present and homozygous to create a much stronger phenotype (and higher breeding value) than is seen in either parent.

I suspect the same would hold true for the cristation trait as well. My experiences with this phenotype seems to indicate that the trait is recessive. Whether it is a single gene, a major single gene combined with lesser modifier genes or an interaction of several major genes, I can’t say. All I can say is that when I outcross Lavender Feathers to unrelated, non-cristated stock I do not see cristation in the F1. When those F1 are interbred or are backcrossed to Lavender Feathers, I see less than the 25% or 50% (respectively) that I would expect to see if there were only a single recessive gene present. My guess is that there is more than one gene at work, with the major gene(s) being recessive. We know that Lavender Blue Baby is carrying genes for cristation. The same seems true for Texas Feathered Fancy, as well, with it perhaps having somewhat more homozygosity for various genes than its parent Lavender Blue Baby. My best guess is that Lavender Feathers, being a back cross of TFFxLBB, would appear to be a chance segregant having more homozygosity for the cristation gene(s) than both parents, thus more stability for the trait and better breeding value for it also.

Over the years, while I knew that the seedling that became Lavender Feathers was good enough to introduce, I didn’t know if I would or not, but I kept asking myself two important questions. 1). If this seedling did not have cristation, but was simply a purple with this level of rust resistance, would I introduce it?, and 2). If this seedling had this level of cristation consistency but was less rust resistance, would I consider introducing it? The answer to both questions was always yes, especially to the first question. So with both of these traits combined, along with an easy to grow plant that looks good, I couldn’t bring myself to keep it hidden away. 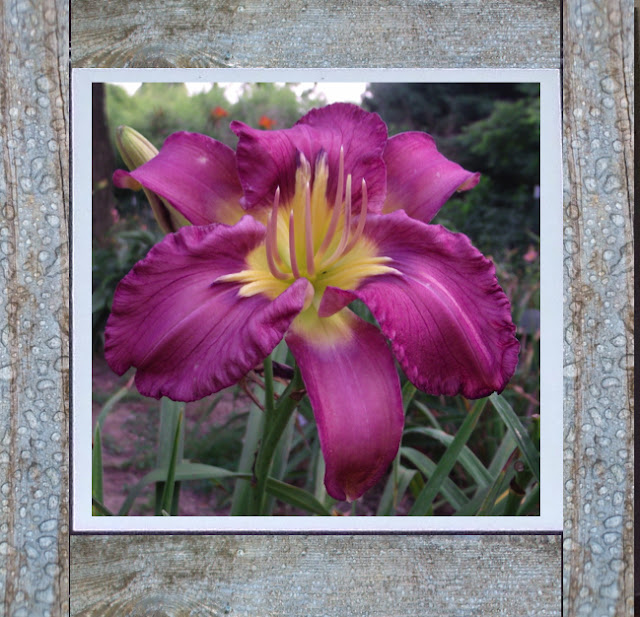 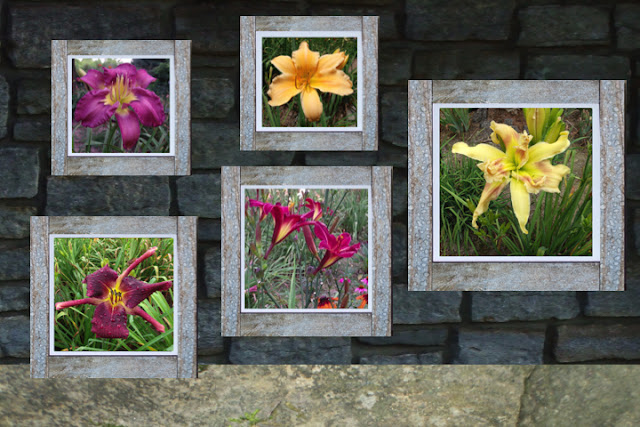