Species clone, not registered with AHS to date 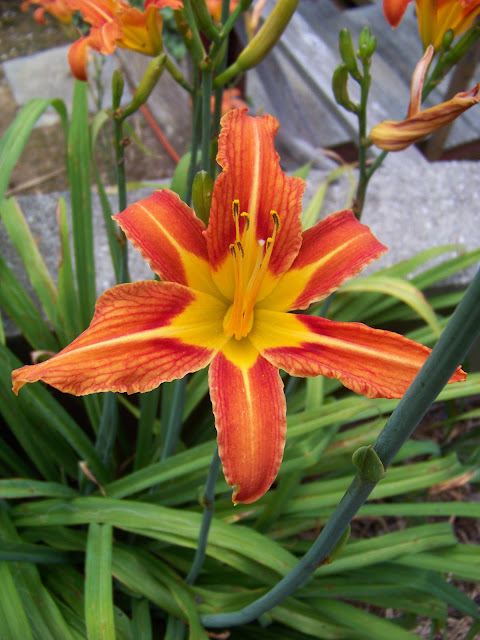 This clone of Hemerocallis fulva is my favorite fulva clone, species clone and possibly my favorite daylily of all time. It is a very large, fine plant that spreads by short runners, but has never shown the fast-spreading growth of the common ditch lily, H. fulva ‘Europa’ in many locations within my garden. The Korean clone of fulva (Hemerocallis fulva ex Korea, Seoul National University, NA 54920) was collected by Darrel Apps and Barry Yinger on a 1984 collection trip to South Korea and is not a registered cultivar, as some fulva clones are such as ‘Hankow’ (Stout, 1939) .

In an article in The Daylily Journal Vol. 43, No. 1 - Spring, 1988., in an article titled Korean Daylily Species by Darrel Apps and Lynn Batdorf is found this description of this fulva clones, on page 18, “Adventuresome hybridizers might be interested in one other plant found in Korea. Time after time in cultivation we saw a plant much like H. fulva 'Europa'. However, we also kept seeing a similar fulvous daylily of a brighter color. At Seoul National University we found what appeared to be a fertile form of H. fulva (the cultivar 'Europa' does not set seeds). This plant is labeled NA 54920. Its flower scapes were 46” tall and the flowers up to 5” in diameter. The throat of the flower was a clear yellow. It had a deep red eyezone and petals and tepals were orange, but with fulvous red veins. Although no attempts have been made to pollinate the flowers, some have formed pods and seem fertile.”

In that same article is also this statement in regards to the use of species material in hybridizing, on page 19, “Then there is always the plant that has been tampered with too much. Agronomists realized this when corn blight hit their non-resistant hybrids and nearly wiped out the whole crop. That kind of danger exists for daylily hybrids too. Usually species plants that have evolved over millions of years offer disease resistant germ plasm.” While this statement was not specifically made about this Korean form of fulva, it couldn’t have been more prescient, as rust wouldn’t appear in American gardens until twelve years after this article was written in 1988. More on that below. 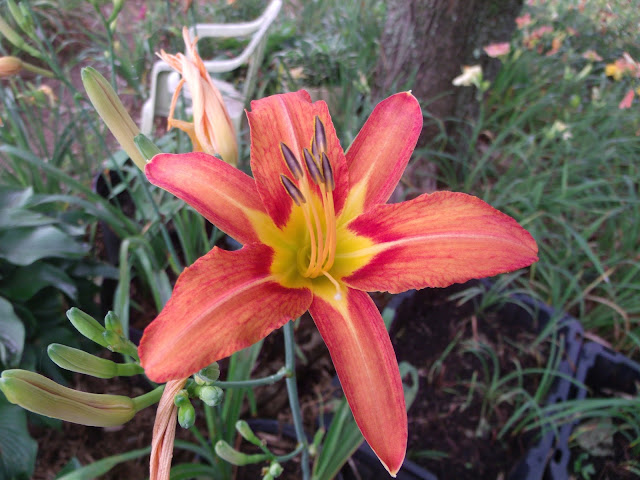 The plants I grow of this clone is as described above in the Journal extract. It is much more attractive to me than ‘Europa’ or ‘Hankow’, and looks a tiny bit more like a selected hybrid than a wild clone to me. Of course, there is no way to know if it is a wild collected form or something that was bred or selected in Korea at some point in history. However, it gives every indication to me of being a clone of fulva, even if it is a selected or captive produced form.


The plant is large and attractive with chartreuse-green colored foliage that is quite golden in early spring, becoming more of a light green later in the year. The scapes are tall and fairly well branched for the species with an average of about three branches and a top Y. The scapes are tall and hold up well. In my garden, the plant behaves as fully senescent (dormant) going completely underground in most winters, though I have reports of it behaving as a 'semi-evergreen' in the deep south. While the plant spreads by runners it does make a large clump, but in spite of its size, it spreads a much shorter distance on each runner from the main clump than ‘Europa’ and it does not spread nearly as quickly or vigorously as ‘Europa’ in my garden. So far, it hasn’t escaped and eaten the countryside. Each clump of it I have, in different areas of the farm, is a clump with a few fans a short distance from the clump after more than five years. 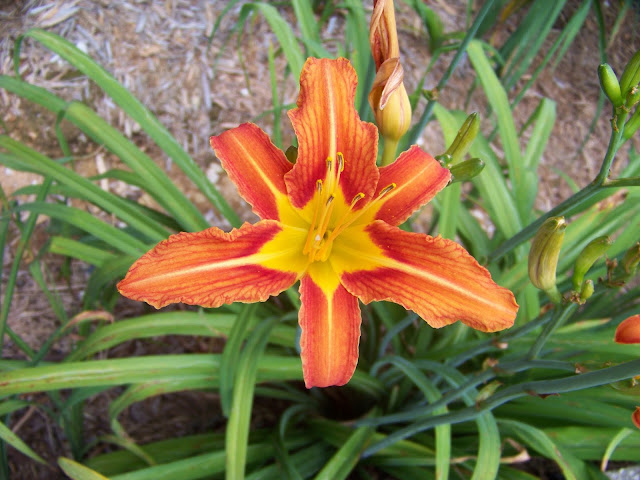 This Korean form is thought to be a triploid. There is some thought that there was a diploid and a triploid brought to the US by Apps/Yinger in 1984 as “Korean fulva”, but to date I have not been able to find any information or plants of a smaller, more gracile diploid form and it is not mentioned in the Daylily Journal article from which I drew the above extracts. All plants of the ‘Korean’ fulva that I have been able to gather information on all fit the description from the extract above - tall, a bright orange flower with a bright yellow throat with a red eyezone and red veins on scapes around 4’ and a large plant. The plants of this clone that I grow derived from Dr. Joseph Halinar from Oregon who gave this description of it, “Very impressive flowers with a clear, crisp color, more red then typical of fulva. Produces unreduced gametes. So far I've only gotten seeds when pollinated with tets, but seems to cross to diploids as pollen. Seedlings tend to be fertile. Very useful for interploidy crosses.” Note that Dr. Halinar does not say if the plant is diploid or triploid.

Gil Stelter also grows this clone and has told me that the pictures of the flowers of mine appear identical to his and describes his plant as matching the Apps/Yinger description. Mr. Stelter sent samples of his plants to Jamie Gossard for flow cytometry testing, which showed it to be a triploid. I suspect this is accurate.

Regardless of exactly the ploidy of this clone, it is fertile, and fairly exceptionally so for a triploid, if that is what it in fact is. Dr. Halinar above described it as only fertile with tetraploids as a pod parent and fertile with diploids as a pollen parent. Mike Huben told me that he had crossed this clone with diploids with success. I have only ever used this cultivar to date as a pod parent and I have mainly used it with tetraploids. The only diploid pollen I have put on ‘Korean’ to date is Substantial Evidence, from which I got no pods at all. I have gotten large numbers of seeds for putting tetraploid pollen on ‘Korean’, with each pod having between three and eight seeds, and most flowers pollinated setting a pod with tetraploid pollen. I plan to do some sample crosses next year with its pollen on both dips and tets, and with dip pollen onto ‘Korean’. I will report any experiences here as an update. 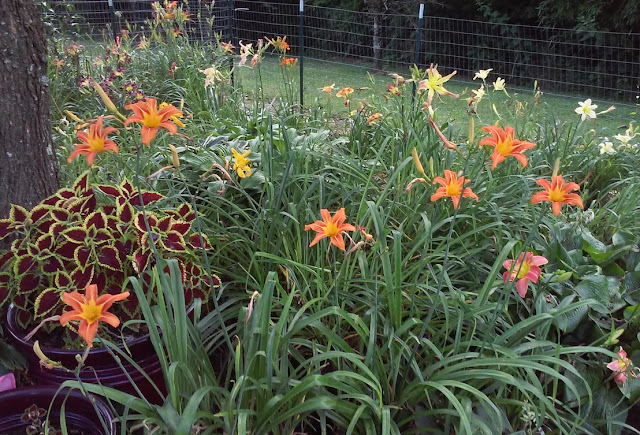 The key to this cultivar in regards to breeding though, regardless of its ploidy level or its exact fertility combinations with other ploidy levels, is that it is a species clone with the ability to produce seedlings as a pod parent directly with tetraploid cultivars. This, to me, is extraordinarily important, as the tetraploid gene pool to date derives completely from conversion material. It was formerly thought that the tetraploid cultivars couldn’t be taken back to species clones without those species first being converted, or in rare cases of an unreduced gamete, maybe a pod with a seed or two could be produced from hundreds or thousands of pollination attempts on something like fulva ‘Europa’, fulva 'Hankow' or some H. citrina clones. The ability to now go back to species directly without conversion through the use of this fulva clone opens tremendous doors for widening and improving the gene pool of our tetraploid cultivars.

As if that weren’t enough though (and this ties back into the second quote from the Apps/Batdorf Journal article I quoted above) this ‘Korean’ form of fulva has shown itself to be extremely rust resistant in my own garden (seemingly-immune, in fact) through all five years of my rust resistance screening, and this is on multiple clumps in multiple locations, with very susceptible cultivars planted all around them and literally dripping rust on them, and yet, not one spot of rust sporulate has ever appeared on any of those clumps in my garden. Further, I have experienced very good breeding value from this cultivar for rust resistance, regularly seeing a higher than average percentage of resistant seedlings from it as pod parent, ranging from moderately high resistance through many with seeming-immunity over several years of screening. It is also the most useful plant I know for use in ‘salvage projects’, where a very resistant cultivar is crossed to a much lesser resistant cultivar in order to ‘salvage’ the flower traits of that lesser-resistant, fancy cultivar onto a more resistant background plant. 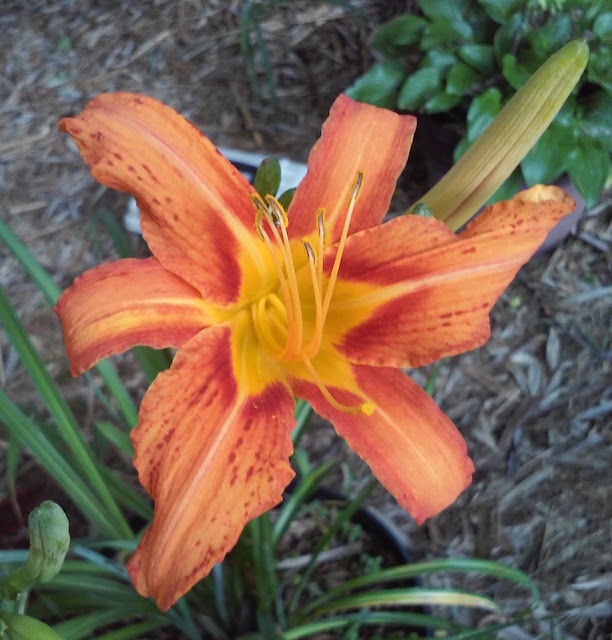 The seedlings I have produced from ‘Korean’ as pod parent crossed to tetraploid cultivars as pollen parent have a range of foliage color, ranging from light green to dark green, with many more being dark green than one might expect. The seedlings are very hardy, as is this ‘Korean’ clone, and the foliage has ranged from senescent (dormant) through semi-evergreen to evergreen, depending on the pollen parent’s foliage. All foliage types have been very hardy here. The majority of the seedlings I have produced seem to be quite frost tolerant and are what might be called ‘semi-evergreen’.

The flowers of seedlings are not as fancy as the fancy pollen parents, but they are considerably more advanced than I expected, with such traits as edges, patterns and colors other than orange coming through in the first generation. I have been very happy with them, and those F1 offspring crossed back to fancy types have been rather fancy. To go from species flower to modern face in two generations is exceptional in my opinion and is no longer than I have seen in outcrosses with such cultivars as Ancient Elf, Notify Ground Crew or Chicago Apache.

The only flaw I have found with his cultivar is that it can show susceptibility to thrip/aphid attacks in conditions where those insects are abundant, and in very severe infestations, there can be bud drop or scape loss, while in moderately heavy infestations there can be spotting and some twisting of the sepals. However, for all its good traits, it is worth working with in spite of this. Just mate it to things that don’t show this problem, or if you don’t have these insect predators or spray for them, then you won’t see any problem anyhow. I have gotten many seedlings much more insect resistant by just mating it with things more resistant to thrips/aphids.

Maybe I should say nothing about this cultivar and keep it and its many uses for myself, but I just can’t. I think it is too important to the long-term future of the tetraploid daylily gene pool. My recommendation - get it and use it! I would like to see every person breeding tetraploids use this Korean fulva clone to make at least one line by breeding it to their most advanced line(s). I am not asking anyone to make it the center of their program, but rather to just make one cross with what they consider their finest, maybe even making no more than eight or ten seeds (though certainly, make more if you want!) and use those F1 seedlings to take back into their finest lines, selecting the strongest seedlings, and where applicable, the most rust resistant. If even a few of us do this, it will be a boon to the future of the daylily, expanding the narrow gene pool of the tetraploid daylilies and possibly bringing in new phenotype genes we do not know about and that have never been explored in the domestic daylily. If you want to breed for rust resistance at the tetraploid level, you can't go wrong using fulva 'Korean'.