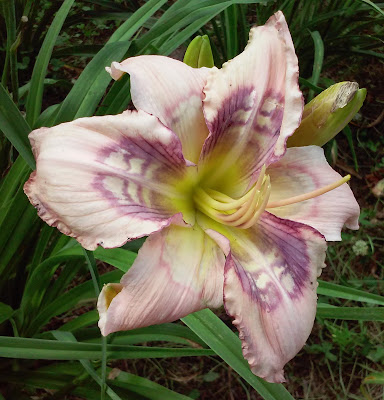 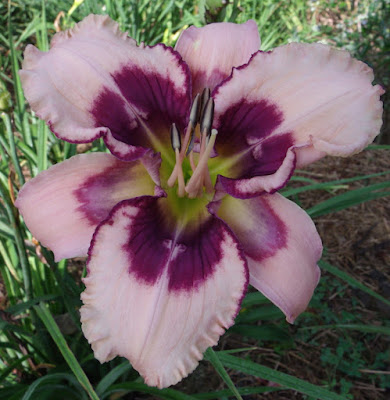 The above photo shows Whale Tails on a very 'dark' day with a more discrete, but equally lovely pattern with a lot of bluish lavender on the sepals. Whale Tails is an extraordinary patterned evergreen tetraploid daylily. It isn't perfect for me, but it has been a very good breeder, and when it is good, it is great. I have been growing and breeding from Whale Tails for several years, and I have photographed it every day when the flowers were good, so I have a lot of good flower pictures of it. Here in my garden, in most years, it is about 50/50 on 'good hair days' and 'bad hair days', especially on the first round of scapes, which often show the effects of late freezes here in my garden. 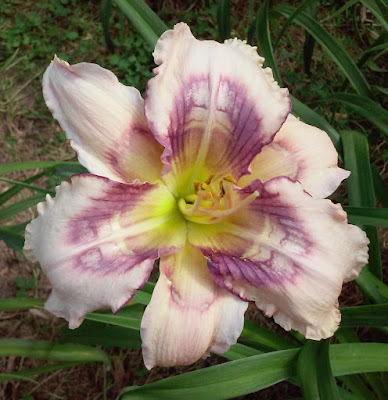 The plant is evergreen and is hardy here in my zone 6/7 garden. I have never seen it have fan-loss in even the worst winters here, but it frequently sustains damage from late spring freezes which can cause the foliage to look poor and/or scapes/buds/flowers to be adversely effected. It can also show some thrip susceptibility on those early scapes. In years when it reblooms the flowers often melt by midday in extreme heat. Late season rebloom, when it occurs, tends to look amazing and many of my pictures are from occasional late season rebloom. 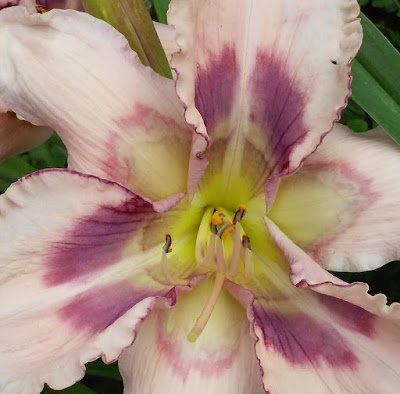 Look at that gorgeous pattern, both petals and sepals! While I am not thrilled by the canoeing as seen in the picture above, it doesn't do this consistently and it can throw kids that don't show this, so the trait can be selected away from. However, the high rust resistance (highest I have seen on any tet pattern I have tested), cold hardiness and amazing pattern make it a valuable breeder, and I highly recommend it to anyone who wants to breed for patterns with rust resistance. In warmer-zone winter areas, this one is invaluable for breeding patterns and for its rust resistance. A very important contribution by Dan Hansen! 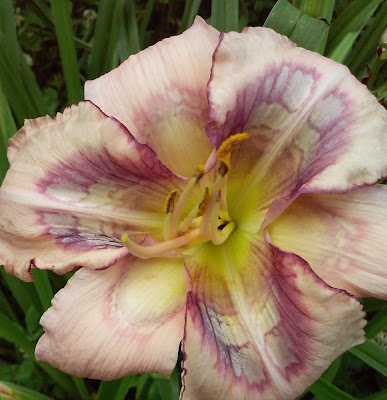 The above picture shows just how amazing the pattern and color combination can be! The very blue areas on the left of the lower petal is actually the effect of the flower partially melting on a very hot summer day. Note the wonderful pattern on the sepals.

Whale Tails is a great breeder throwing rust resistance, especially when crossed with other rust resistant plants. It also throws interesting patterns and the problems I have seen with Whale Tails in my zone 6/7 garden (which is a different environment and much colder than the garden it was bred in!) were not enough for me to not use it and I have demonstrated to my satisfaction that it is a valuable breeder and these problems can be selected away from, making plants more suited to my cold-winter climate. Whale Tails is a valuable addition to any pattern or rust resistance breeding program and is fertile both ways for me.

The photo below shows a clump of Whale Tails with early season scapes that show some problems from several late spring freezes - flowers only partially open, short scapes and very low bud count...even at that, it is still beautiful! Use it, pair it intelligently and reap the benefit of this piece of Dan Hansen's fine work, just be aware of the shortcomings (at least in cold-climate areas) and balance them in your breeding. 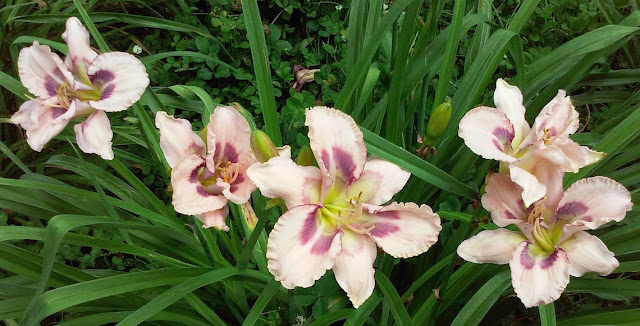