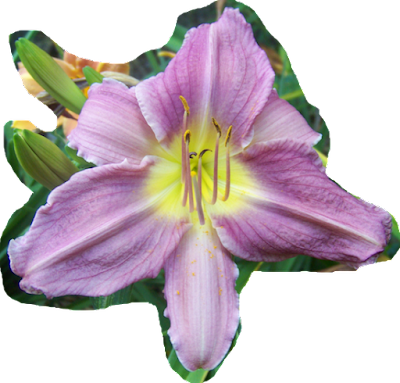 Prairie Blue Eyes is an old classic, but still useful for the landscape and for breeding. It doesn’t have a blue eye, but the eye is a lavender of a bluish tone. The plant is a semi-evergreen that is hardy here in my zone 6 garden and was bred by Mr. Marsh in the Chicago area, so likely is hardy much further north. I have reports of it flourishing all over the north and into the south as well.  The foliage is generally attractive and the plant increases quickly.

Prairie Blue Eyes shows good rust resistance and has been noted for that trait in many gardens and in several evaluations. In the Buck (2013) evaluation, Prairie Blue Eyes was found to have High Resistance (rating HR) to 15 of 16 rust accessions, with Resistance (rating R) with one strain. I have seen no variability in its high resistance here, but I do have reports of it showing mild rust in some gardens.


I have found Prairie Blue Eyes to have breeding value for rust resistance in my breeding program, and I have multiple reports of others finding this same thing in their own breeding work with rust resistance. This makes Prairie Blue Eyes particularly valuable for breeding, even though it is an old cultivar, because resistant purple cultivars are few and far between.
Posted by Brian Reeder at 12:37 AM